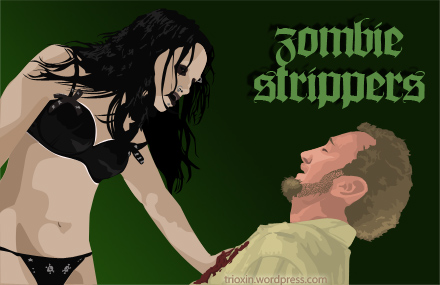 Themes of morality, conformity, alienation, existentialism and political satire are just what I would expect to feature in a film called ‘Zombie Strippers’. Ha ha, Who am I kidding! Strippers turning into zombies is all I was looking for in this beauty, but there was plenty more than that on offer in this wee number, philosophy and all.

Now apparently this film is based loosely on a French play ‘Rhinoceros’ about a town whose population slowly turn into rhino’s, but being the uncultured slob that I am I’ve never heard of it, although it’s a pretty big deal in the world of the Theatre of the Absurd, apparently. It’s certainly an interesting idea on which to base a Zombie horror film, but to be honest I was only watching it for the stripper zombies, so the influences didn’t really matter to me.

As is the often the case these days, the government have been experimenting with chemicals and dead bodies in order to produce a race of super strength soldiers, but completely unexpectedly this goes wrong somewhere down the line and a load of Zombies are produced. A special soldier unit is called in to exterminate the living dead, but one of them gets bitten and runs off, taking refuge in an underground illegal strip club. This is the setting for the whole rest of the film, as the soldier bites star-dancer Jenna Jameson and turns her into an Undead Stripper Zombie, a side effect being an ultra sexy stripper dance and a lusting for human flesh. The Zombies dance for the punters, punters get eaten and turn into neanderthal undead while the female zombies remain intelligent and feisty to the end.

The whole film was a lot less trashy that I was expecting, with some great dialogue as the Strippers quote philosophy and discuss morality, and Robert Englund the strip club owner tries to find a way to profit from this whole debacle, while keeping the whole ‘Murderous Zombie’ aspect a secret from the general punters – although it starts becoming obvious that the dancers are no longer technically ‘Live Nudes’ any more, but rotting-corpse lapdancers. The humour is reasonably decent, the gore is great and often rather gross (which is certainly a good thing) and the nork count is obviously through the roof. Cleverly written, pretty original and totally unexpected considering the genius movie title. Who would have expected Nietzsche-spouting strippers discussing the merits of grotesque body modification? Genius stuff and one I shall certainly be watching again, with (several) beers in hand.

Seen this zombie movie? What did you think? Cancel reply