This film is showing on Netflix Instant US. Visit Blog of the Living Dead for details 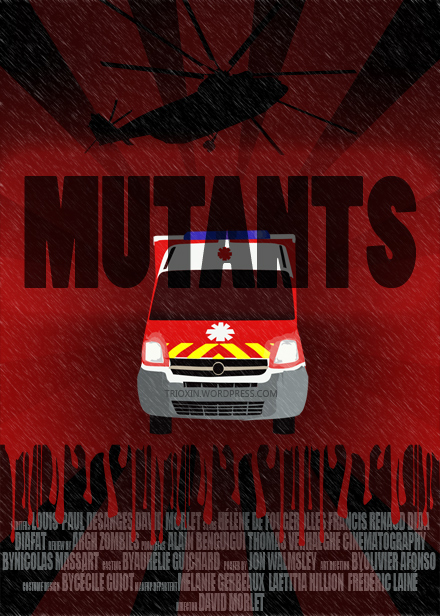 It has often been said that 28 Days Later has a lot to answer for, a complaint that is usually uttered by bloggers out of anger at all the running zombie-type creatures that have spawned since that great 2002 movie (although surely running zombies have been around since at least Return of the Living Dead back in the mid 80’s, but hey). While that may or may not be a valid complaint, something that can’t be argued is that 28 Days Later has been responsible for some truly great movies, possibly the finest offspring being MUTANTS; a little French number from 2009.

Some bird and her fella are trying to escape the current epidemic of human-mutants in a little ambulance (that probably belongs to the lass as she seems to be a nurse of some kind) a great choice of vehicle during a zombie apocalypse for sure – although probably a bit slow on the acceleration to be perfect – when this glorified ice-cream van unsurprisingly runs out of fuel (well it can’t be that efficient a vehicle really, driving around with a portable surgery in the back!) The pair have to hold up in a random building out in the snowy mountainous woodland they seem to have found themselves in. Unfortunately for the chap he’s recently been infected with the zombie contaminant so it is up to the chick to either try to cure him, kill him or contain him until a cure can be found.

What starts out as a pretty standard humans-escaping-zombies movie turns into a study of a mans descent into madness as the chap slowly turns from human boyfriend into crazy violent zombie nut-job. Sure, all she needs to do is whack this dude over the head or inject him with a huge dose of killer nurse drug to prevent him from turning, but can she do it? He is her other-half and the only link back to humanity she knows. Plus she believes she has found a cure herself, so she can’t really kill him off without at least trying to get the cure working, can she?

This was a great movie. The pacing was spot on, there’s loads of gross bloody moments and the performances by the two main leads – particularly the main dude – were a horrible joy to watch. There are the standard Zombie clichés present here – People trapped in a building with zombies trying to break in, arguments between the survivors about what to do, suspenseful ‘is there a zombie behind that door or not’ moments and some ass-kicking zombie death too. Sure, it was bloody while not being particularly gory, and it was sadly lacking in the nork department, but then I guess that would have turned it into a different sort of film and to be honest it works perfectly well as it is.

Seen this zombie movie? What did you think? Cancel reply