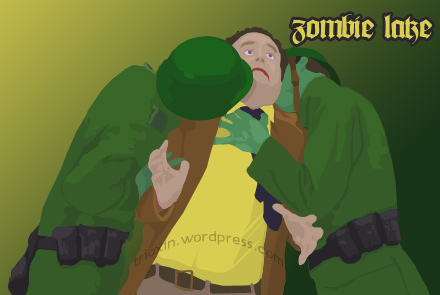 Having read up on many Zombie films, the majority of which get appalling reviews from more or less every source worldwide, I have been wondering what it would take for me to hate one of these films. Terrible dubbing, dreadful acting, an awful plot and atrocious makeup effects would usually gain a negative review from most sensible people. I however, do not appear to be one such sensible person, as I love almost all the living dead films that i have ever seen. (“Die you zombie bastards!” being the only memorable exception so far. Man, what a dreadful film, and one that was so bad I couldn’t bring myself to do an image for it, hence the lack of blog entry. But take this as a warning, it is shocking, even with the nork count it has).

Zombie Lake is probably one such film that anyone with any real serious taste for films would find dreadful. Nazi Zombies living in a lake who rise out of it for some unspecified reason purely to eat up any nude lady who wanders past.

Apparently the budget of around £5 to film didn’t stretch to makeup (the Incredible-Hulk-Green paint that the zombies were coated in, and the ‘gore’ effect consisting of the zombie having a mouthful of fake blood, and dribbling it over their victims neck are evidence of this cheapness.) nor did it even stretch to any stock footage (Aeroplanes overhead are only heard and never seen, while the cast look up and scream for some reason while bits of grass explode).

As for the supposed ‘plot’, one Pre-zombie Nazi knocks up a chick in a barn (where it is night when they go in the door, but daylight through the window as soon as they are inside) without ever speaking a word, and then goes off with his Nazi buddies and gets killed by rebels and they all get dumped in a lake. For some reason they then turn into zombies and rise up 15 years later to kill off a nude swimming lady, a nude woman taking a bath in her garden, and a whole team of female volleyball players. (Obviously all nude as well).

The plot is terrible, the acting sucks, and the makeup is some of the worst i’ve ever seen. However if it weren’t for the spectacularly pointless and constant nork shots (and more) throughout the whole film, and the sheer laughable nature of the whole plot this might be a film I rate badly. But it does have all those things, and because I love my trash and exploitation cinema I have to rate this highly. If only in a nork factor five manner.

Gore Score 2\5
Norks Score 5\5
Overall Score 3\5 (I’ll certainly watch it again, cos it was a great laugh. Pity it was so terrible).