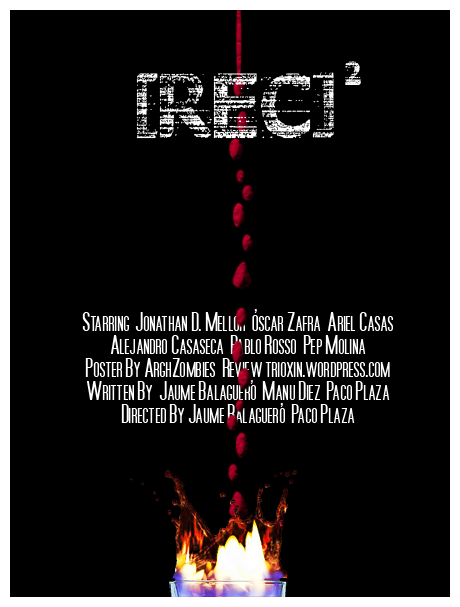 Following on directly from REC; not just by being a sequel but actually following on directly from REC, REC2 covers a small group of armed police who go into the apartment block immediately as the closing credits of the first film would be running under the impression that they are there to check for survivors. However, what with this being a horror movie things are not as they seem.

After meeting up with an appointed government representative the team are filled in on the real purpose of this mission and the group of chaps have to race around the apartment building in the dark from floor-to-floor with their helmet mounted cameras (yes, this is how they keep the handheld camera theme going) in a similar vein to the first film for another 90 minutes trying to get to the bottom of the situation.

However, as much as it may sound, the movie is not really a retread of the first. The is a side stories going on here involving a group of kids breaking into the apartment to see what’s going on which provides a nice change of scenery (well, a change of characters at least – they’re still all stuck in the same apartment as everyone else from this film and the previous). There is also a change with the direction that the zombies take: No longer are they the mysterious infected, this time we know why – and it is an altogether more daemonic situation that we expected.

OK sure, there were hints in the first film as to what was going on, but they were really just there for effect – we had no idea what was really going on in that small apartment block until this movie (and even here it’s not completely answered – we’ll have to wait for the next two films for that).

So, as a movie how well does it do? Well it’s not as scary as the first one – possible because we’ve seen a lot of this already done in the first one, although it does have it’s moments – more so than most zombie films these days. Is it gory? Well again, nowhere near as much as the first. However what about as a story? Well this movie actually has a story, so it beats its predecessor in that respect. (All REC was about was just some woman running up and down stairs being chased for 90 minutes). But is it better than the original? No, probably not, although it’s a darn sight close. REC took a claustrophobic formula, ramped up the action and gave it all a fresh approach. REC2 is very similar, and where it improves over the original is with the story and the characters. However it does all take place in the same setting and probably isn’t different enough to be superior.

Another day, another zombie animal movie. But Zombeak is not exactly in the same league as Black Sheep. The special effects team behind this one didn’t work on Lord of the Rings, the locations don’t involve the beautiful sprawling countryside, and the acting, editing, sound effects and vocal overdubs were not done with finesse or experience. No, Zombeak is straight out of the “I’ve got a stupid title, let’s try and bodge a movie idea into it” film school.

Usually when such a film plops onto my doorstep (which sadly happens via my own purchase) it’s a sign that I’m letting myself in for a boring evening’s movie viewing. However with Zombeak this wasn’t the case. Sure, it was a terrible movie by normal standards, but it was made with just the right amount of awful comedy, bad acting and ludicrous plot that it just seems to work.

Some stereotypical Goth Satanists have taken a young blonde lass hostage and are preparing to impregnate her by summoning the spirit of Satan himself into one of their number, who will then ravish the young lady in a reverse-exorcism ceremony. This is being helped along by using a dead chicken and some chanting to summon his horny lordship. While all this is going on, blondie’s fiance has rounded up the town’s single policeman and a local burger-bar manager to try to track her down. They all converge in an abandoned house interrupting the satanic ceremony, causing the Devil to transfer his soul by mistake into the sacrificed poultry carcass. Naturally all hell ensues with the zombie/demon/satanic chicken hunting down all the goths, rescuers and police and turning them in demonic zombies. Obviously there are some survivors of this chickenapocalypse, and it’s up to them to capture the chicken devil and put a stop to all this nonsense before it turns the whole town into zombie demons.

Yes, the plot is nonsense and it’s true that the speech seem to have been added over the visuals from a studio located in a cupboard, but it’s perfectly possible just to ignore such minor issues, especially considering that you shouldn’t be expecting ‘Lord of the Rings’ in a film called Zombeak.

The characters themselves really play up their roles (particularly the ‘crow’ looking goth dude who sadly gets little screen time himself) and the zombie chicken himself is fantastic. Also the direction for such an obviously cheap movie is actually quite polished. It’s not a movie to watch with anyone who’s been brought up with only Brad Pitt movies, but then DTV movies have never really been about all that Hollywood nonsense. At the end of the day if you only watch one zombie chicken movie, well, that should be Poultrygeist. But if you fancy watching a cheaper, less well made one with no lesbian musical numbers then you can do a lot worse that Zombeak.